As of May 2019, we aimed to engage the 32 political parties registered at the Supreme Court of Mongolia. However, only 8 political parties, namely the Civil-Will Green Party (CWGP), Democratic Party (DP), Mongolian Green Party (MGP), Motherland Party (MLP), Mongolian People’s Party (MPP), Mongolian People’s Party (MPRP), National Labour Party (NLP), Truth & Right Party (TRP), agreed to partake in this research. This year, the total score of political parties has increased by comparison to the previous year. The participation of political party members has increased due to the nomination of candidates to upcoming 42nd district re-election. Moreover, 2019 is the Parliamentary pre-election year, it was a unique period in which political parties have begun holding their low- and high-level assemblies. This has significantly impacted the overall index score.

Our research team made a request for the copies of the rules of political parties on May 29th, 2019. The SCM refused on the grounds of Article 12.5 of the General Law on State Registration, which requires a written approval from the legal entity whose information is being requested. 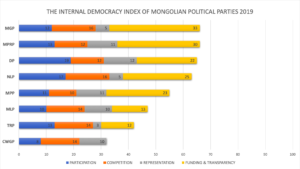